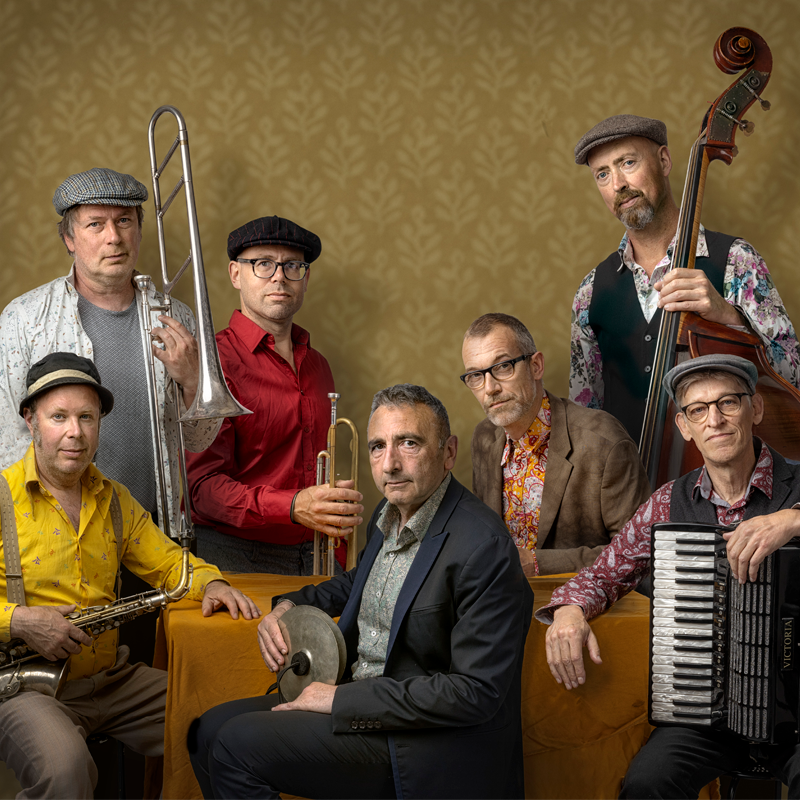 Mix a dose of klezmer with a pinch of jazz, add a shot of Balkan and a smidgen of Gypsy, et voilà, you’ve got the recipe for Amsterdam Klezmer Band. Brass, double bass, accordion and percussion all bolster each other with pulsing grooves full of subtle yet raw energy. They really like to make an audience sweat, but they can make you dream away on a soulful lament as well.

The Amsterdam Klezmer Band started out on the streets in 1996 as a group of buskers playing traditional Yiddish Music. 25 Years have gone by in no time! The band has evolved into an internationally celebrated band with a rock solid live reputation. During all this time the band managed to stay on the radar non-stop, touring all over the world. Their impressive tour list containing far over a 1500 shows by now. They built an audience of connaisseurs that have been loving them for many years, and there’s always a young crowd merging. Their music is inspiring fellow musicians from latin America to Russia resulting in colourful AKB-song covers you will find on Youtube.

AKB re-energises the sound of klezmer by throwing contemporary styles and techniques in the mix. Balkan and oriental Music are gratefully used as key influences. The band manages to keep their music fresh, urgent and often highly danceable wherever they take the stage.

On their most recent AKB album Fortuna, released in 2020, just after the first covid lockdown, producer Stefan Schmid opened up the seasoned Amsterdam Klezmer Band. Schmid: “In fact it’s all about Brotherhood. A good deal of Gotspe combined with typical Amsterdam boldness, that’s Amsterdam Klezmer Band. Fortuna is a unique album with subtle added disorderly elements.’’ So is it still Klezmer we’re dealing with? Damn right it is! The sound of Klezmer Music has developed and changed throughout time and we see no reason to put this fact on hold.